European Road Trip Day 1 (who talked me in to this?)

Who the hell talked me in to this?

Actually, that is not fair, I love riding my motorbike and especially through Europe and this time is no different.  On my own with just the road to focus on, there is something about riding a motorcycle that takes a person out of day to day life, my brother Jamie meditates and I sometimes think when he is describing the experience to me that riding a motorcycle is very similar.

It is Sunday afternoon and I just arrived in a place called Poznan in Poland approximately 1,704 km from my front door in Yorkshire and I left on Friday – that is a lot of meditating!

Whilst riding that kind of distance you get to think and then think some more, then a little more and so on.  After a while the city lights fade away in your mirrors and the buildings along your route get smaller and smaller until eventually there is nothing – just you, the bike and the road.  It can be a very special experience and at that level the things that troubled you can suddenly appear simple.

As someone who focuses on digital business I assume that the argument against leaving the EU won’t affect me as much as it does a manufacturing type business for example.  With this conclusion in mind I listened half heartedly to news reports and was of the opinion that leaving the E.U. sounded like a good idea.  Then I heard someone say how big the decision was and how it could quite possibly be the biggest political decision of my life.

This made me think and after some careful thought I came to agree – this is a BIG decision.  Instead however of turning up at my local village hall on voting day with no idea what to vote for until my pencil is an inch from the ballot paper I thought I would do some research – after all this could affect one or two of the businesses I am involved in directly if I was wrong about the impact on digital.  I began watching more and more TV, listening to more and more radio but quickly found that much of what was being said was assumption and guesswork at best.  What surprised me was how many of the politicians wheeled out actually appeared to work on my fears.

I heard how my mortgage was likely to increase, I heard how the economy was likely to suffer, I heard how jobs would be lost – I am quite sure after this is all over someone will put a nifty infographic together of the more bizarre claims thought up and spilt out to terrify one and all.

None of the above actually helped me to make a decision however, it just made me angry which isn’t good so I began to ask those people around me what they thought.  I was surprised how many people were angry and as a result intended to vote in anger to leave.  That’s not good either.  I decided as I had a #DigiDinner in Warsaw and Berlin on the horizon to go and find out for myself what Europeans think and in turn to try and take a look at the decision from the outside.  Afterall, if I am going to leave the party lets check the party out before leaving, eh?

The people I have spoken with and the stories I have heard have surprised me to say the least.

By the way, I have not yet decided – I will use the people I meet along the way and the stories I hear to help me make my decision.

I left London around 10am to catch a train through the Eurotunnel from Folkestone at 12:40, I arrived in plenty of time however a train had broken down on our side of the tunnel so there was a 2 hour delay which passed quite quickly.  I always marvel at the level of engineering required to build a tunnel underneath the Channel, how they managed to do it and make both ends meet in the middle was a true credit to all involved.  I can only imagine the planning that went into making it happen.  The Channel Tunnel is a demonstration of what can be achieved when two countries work together to achieve the utter impossible.

When I arrived at passport control I was asked by a customs officer if I could present my passport.  Whilst we are within the EU we still show our passports when entering France via the Channel Tunnel.  What does this mean?  Are we a part of Europe or aren’t we?  Well whatever, lets move on.  I ask him what he thinks about Brexit and he replies immediately and definitively – “the UK will leave” and grins at me like a Mexican eating nachos.

As I rode out of Calais I noticed how warm it was, how smooth the road was, how quiet the traffic was and then I spotted a camp for immigrants. It is quite something to hear about this on the news but to then see it, on the side of the road in plain view is upsetting.  It is not upsetting because the people look sad, indeed, the kids seemed happy enough and those I saw were playing football along a road through the camp.  It is upsetting because these people have been made homeless, not through anything they have done themselves but by the actions of other people.  My kids are about the same age as the children I saw playing.  I am not sure how I would cope with this situation should it happen to me and my family – I have a lot to be grateful for.  As I passed by it was not the last I would see of this horrendous situation.

I left France and entered Belgium – just a sign on the road to tell me I was changing countries.  No passport control, no checks, just a clear road and a signpost.  Another way you know you are in Belgium is by looking at the road.  It’s bloody awful, really.  You go from nice tarmac in France to what could be loosely termed as worn cobbles in Belgium. 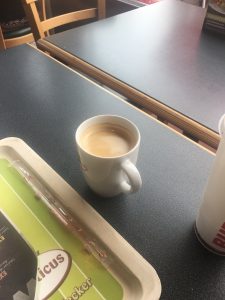 Along my route to Brussels I spoke to someone at a gas station, he was filling the vending machine and whilst I waited I thought I would pop him the question so turned to him and said “If you were me, would you vote to leave the E.U.?” he looked up at me and paused, closed the door to the machine he was servicing and then replied quite softly, “no”.  I was somewhat surprised that 1, he had understood me, 2 that he knew there was a referendum in the UK and 3 that he had an answer.  Ok, I thought, here is an opportunity to dig a little deeper, does he know about the immigration issues we have, the amount of money we send across, the crippling legislation forced upon us? I replied “Why not?”.  He looked around as if looking for a chalk board but instead picked up the sleeve of cups he was about to pop into the machine.  He showed me the sleeve of cups and said “this is Europe” then took one out and put it on the table by itself “this is you” – “why would you want to do that?”.  We conversed for a little longer but he had answered my question in an instant and in that instant I suddenly felt I had a bit of perspective.

Got to bed quite early as the next day would be longer.  The TV had 6 English speaking channels which was nice, how many foreign channels do we have?