I rode out of Brussels and headed towards Hannover, Germany – the next leg of my journey through Europe to Warsaw.

When I arrived in Hannover I parked my bike opposite the hotel and went to check in taking only a few short minutes to introduce myself and get my room key before returning to the bike.  By which time a child was stood up leaning against it, no older than say 6 years of age.  I was concerned for him because the exhaust gets hot when riding and can easily burn someone if they happen to touch it.  He spotted me approaching and scarpered back in to a corner shop before I had a chance to say anything where his brothers and sisters were playing just inside the door. 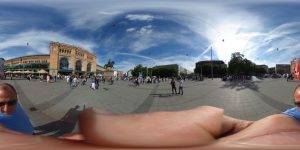 I rode around the block to find a car park, delivered the bike to its secure space and bolted back to the hotel for a quick change.  I realised quite quickly that I had lost some shoes along the way so popped to the mall next door for a new pair, prices are not that dissimilar in Germany to the UK.  Perhaps even a little higher.  So far, so good.  All was well with the world.

I left the mall with a nice new pair of Tom’s and made for a cafe in the centre near the Hannover Train Station, there I sat down outside in the glorious sunshine and began to take a few notes and play with my Ricoh Theta 360° camera which to my surprise can now post pics to Facebook for people to view in full VR.  After a moment or two a gentleman rode up on his bicycle, parked it by a lamp post and sat down next to me.  Not one to miss an opportunity like this I introduce myself as an Englishman in Hannover and asked what he thought about the referendum in the UK?

At first he stumbled a little but after a moment or two he told me that if it were his decision he would vote to remain in the EU.  I asked why and he said that together we are strong but in isolation we are weak.  He was not the first person to say this to me and would not be the last but there was something in his tone that suggested there was more to him than met the eye but I could not quite put my finger on it.  I asked what he did for a living and he replied that he was a teacher then offered me some apple pie which I refused more because we were sat in the terrace of a cafe that sold apple pie than anything else.

That night I went back in to the town looking for a place to eat – I eventually found a nice place and sat down to a steak, there is something about German food that encourages us to order more of it than we can actually eat.  Everything is moorish and whatever you order tastes like meat, they like their meat.

After my meal I walked about the city as it was still quite early, I walked down the main street past the shops towards a bar where the game was being played on a large plasma screen for everyone to take in.  I sat down, ordered a coffee and watched with amusement as England drew 1-1 with Russia.  As I watched the game I noticed people to the side of the terrace, leaning against the walls, some of them were talking, a few were just watching.  Then it dawned on me that they were mostly all drunk and for the most part they were talking to themselves, a lady with a bottle of what I thought was perfume who had been having a conversation with someone since I arrived I suddenly realised had been talking to herself the whole time and that it was wine, not perfume.

At that moment, a lady walked on to the terrace with her daughter, not much older than say 9 years of age – she was begging for money and most of the people handed her coins as she passed by, she then walked in to McDonalds opposite and bought her daughter something to eat.  Literally, hand to mouth.  If Hannover is typical of a German city then the issue with immigration is everywhere.  As I walked back to my hotel I noticed people camped out on sheets underneath street lights fast asleep.

The Germans are sincere in their approach to immigration and from what I can see they have taken a huge number of people in from far and wide but from where I am sitting there is an obvious culture clash.  The German girls for instance wear the shortest shorts of any European country I have ever visited bar none but the female immigrants are fully clothed in layers upon layers.  It is obviously not a marriage made in heaven and I am not sure that on this occasion opposites attract either but somehow they are managing to cope with one another.  I am quite sure that those people forced to flee to cities like Hannover and make every euro cent count in a fast food outlet for dinner can’t wait to return home where they can try to pick up and resume life where they left off, leaving the football, miniskirts and McDonalds well and to truly to the Germans.

As I fell asleep with the window open and the noise of children still playing in the street outside I realised that the tone used by the gentleman I spoke with earlier in the day was one of fear.  He clearly feared an EU future with no UK.  Perhaps he along with countless other Germans are wondering if the UK votes to leave and the EU then breaks apart how will Germany cope with all of these issues by itself?

Tomorrow I head further East to Poland and switch from hotels to Airbnb.

Tuesday night is the Warsaw #DigiDinner and we have at least a dozen or so digital entrepreneurs turning up – the event will be streamed in VR and should be fun.  To join me either in person or using VR use this link.